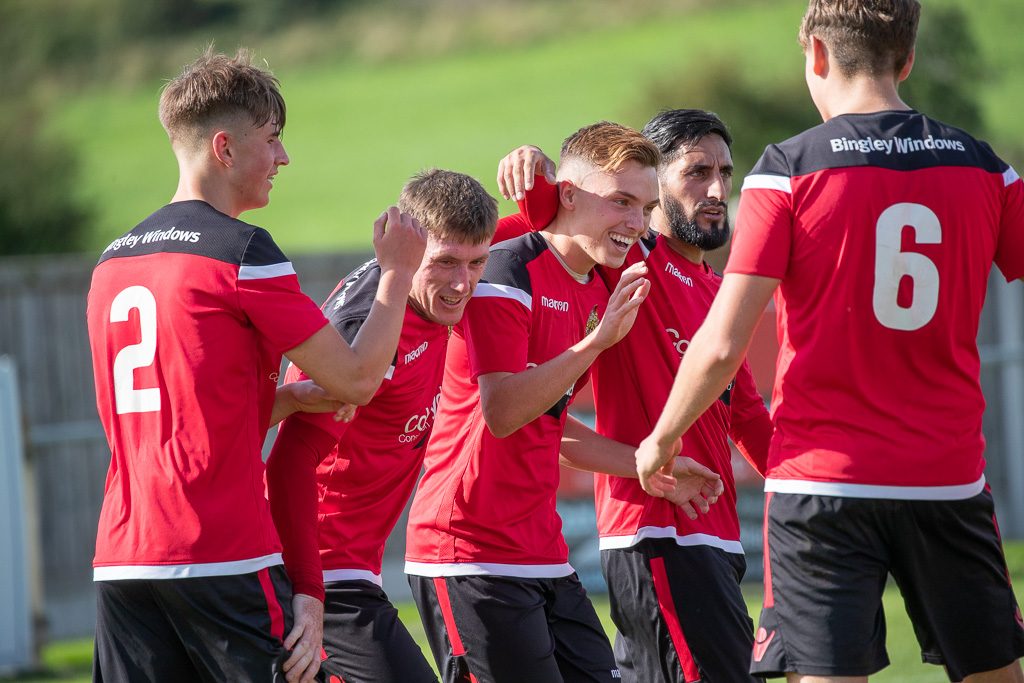 The Cobbydalers entertained Garforth Town on Saturday in a game which provided some rich entertainment for the home side. Town, fourth in the table, unbeaten in the league and still in the F.A. Vase, were expected to provide a stern test for the Cobbydalers who had lost their last two games.

Danny Forrest introduced two new signings, Jay Benn at right back and Jake Taylor-Mountford on the left side of the forward line, both of whom were trainees at Halifax Town. The Cobbydalers were still without Kaine and Moses and Sorhaindo was unavailable.

True to form Town were soon on the attack but Dan Illingworth broke up two early attacks.             Silsden were guilty of surrendering possession too easily and Sean Hunter broke down the right and crossed to Sam Barker whose weak effort was comfortably saved by Alfie Darke. Left back Danny Buttle slung over two dangerous crosses which Illingworth again cleared.

Gradually Silsden settled, Jay Benn releasing Kirby on the right, the striker’s shot being cleared and then a slick move up the right was halted. The two new boys soon settled and Jay Benn had a good dribble down the right before feeding Khurram Shazad. A dip of the shoulder and a pass to Kirby ended with Toby Wells making a fine save.

Both sides created half chances. Benn had a shot cleared and then Josh Brown headed clear at the other end. Shazad slid the ball to Taylor-Mountford whose shot was well saved by Wells.

The game changed in a fifteen minutes spell before the break. Joe Mitchell passed the ball up the right and it was crossed to the edge of the penalty area. Inexplicably Joe Colley handled the ball. Penalty!. Up stepped KIRBY to put the reds ahead. Silsden began to spread the ball about and create openings. A superb move up the right saw Barnes feed Khurram, back to Barnes and out to the overlapping Everingham. He crossed to Kirby, who set up Khurram. His shot was saved by Wells but the moved signalled the confidence of the Cobbydalers with the new boys settling in quickly.

A minute later Everingham sent Barnes down the right. His cross was met by TAYLOR-MOUNTFORD who drove it home. Two minutes later TAYLOR-MOUNTFORD got his second, latching on to a through ball from Mitchell before leaving the Town keeper helpless. Town were shell shocked. Mitchell’s superb curler was tipped over by Wells but ILLINGWORTH netted a fourth on the stroke of half time.

Town’s Dan Williams went close in the opening minutes of the second half but the Cobbydalers were soon creating more chances with some slick “pass and move” football. Mitchell slid the ball to the marauding Benn who crossed to Taylor-Mountford. The debutant almost completed a twelve-minute hat-trick! Garforth showed some spirit and Illingworth and Brown were forced to charge-down efforts from Dan Williams.

Mitchell almost made it seven before BENN broke his way up the right, cut inside and played a one-two before punishing the visitors.  Taylor-Mountford was unlucky not to complete his hat-trick when his curled effort rattled the cross-bar.

With Tuesday’s game away at Barton-on-Humber on his mind, Danny Forrest brought on three substitutes for the final fifteen minutes. Ben Wignall almost netted a minute later but was denied by Priestly. Town’s Priestly almost scored with a header at the back post and Sam Barker shot wide before PRIESTLY netted a penalty conceded by Illingworth. A six-man move ended with Wells making a superb save before Hardisty-Blackwell headed wide at the far post.

It had been a thrilling game for the Cobbydalers and the new boys slotted in well. It was Garforth’s heaviest defeat for eighteen months. The scoreline may have flattered Silsden but Forrest will now be expecting his charges to build on the victory.

On Saturday the Cobbydaler’s travel to Malty Main. 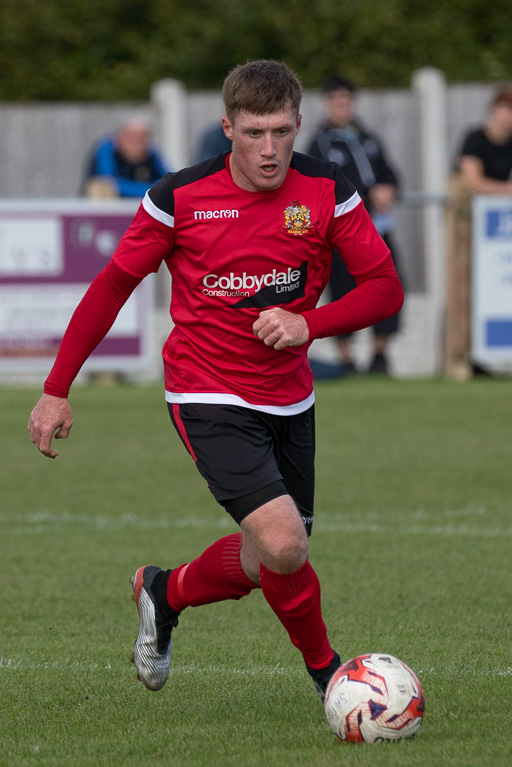 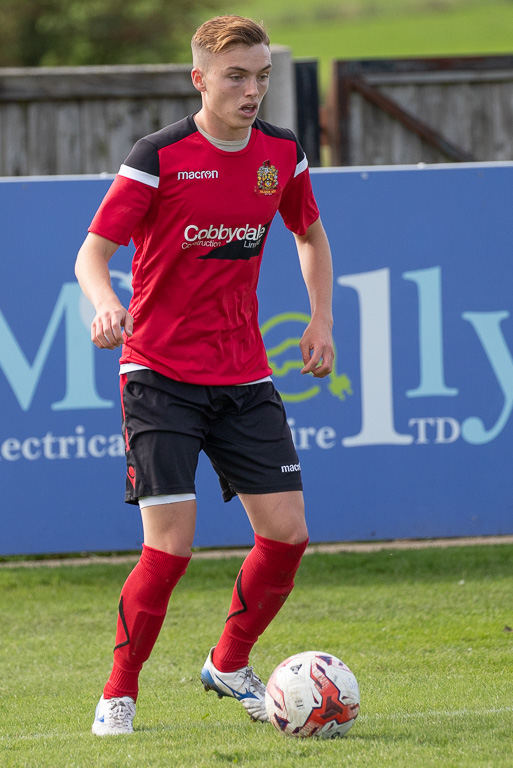 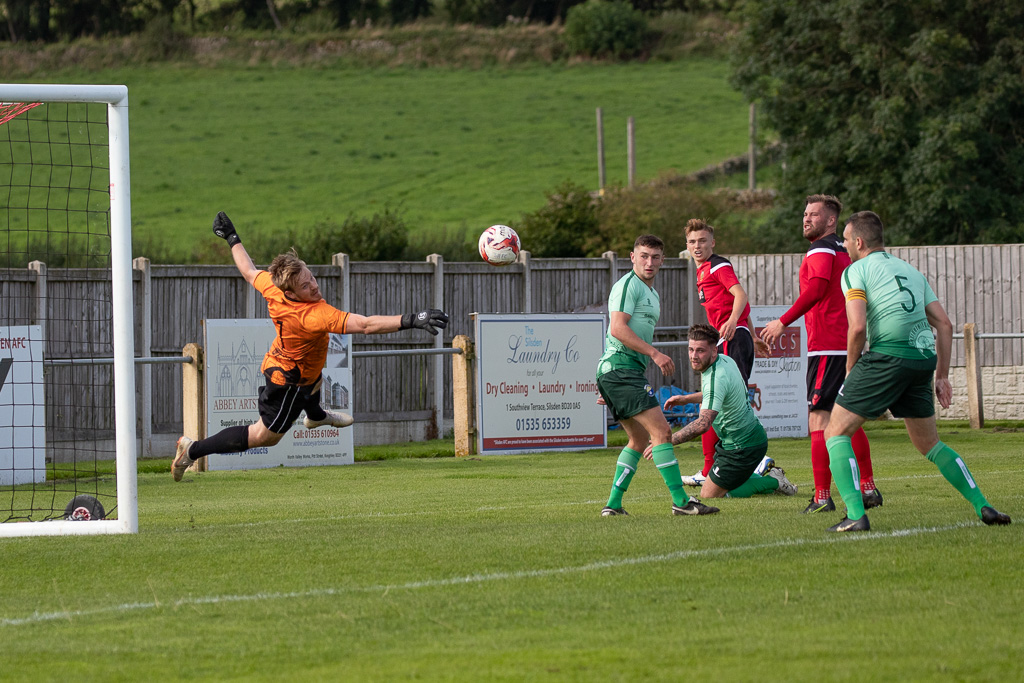 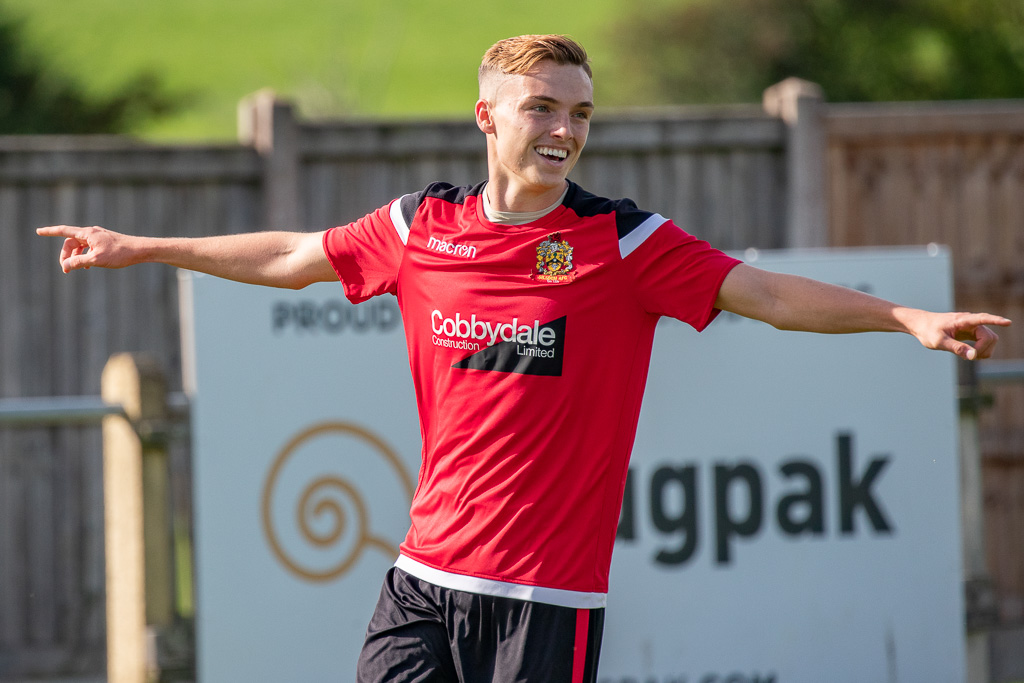 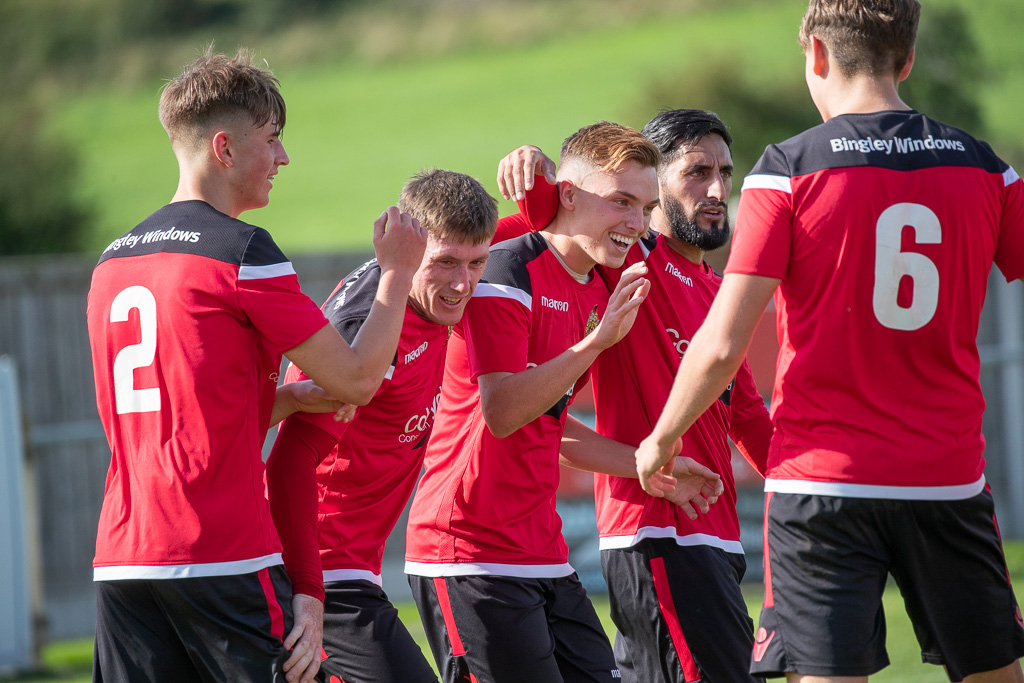 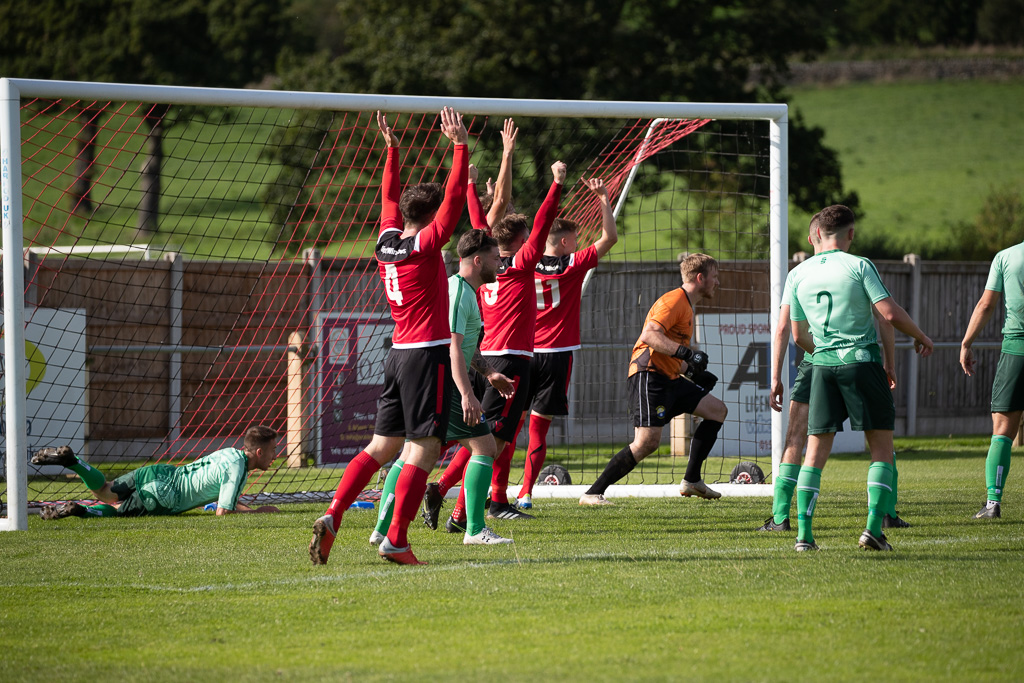 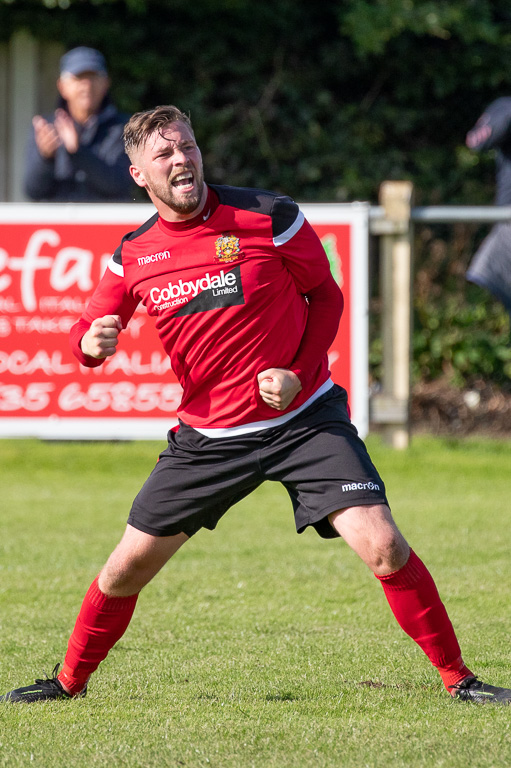 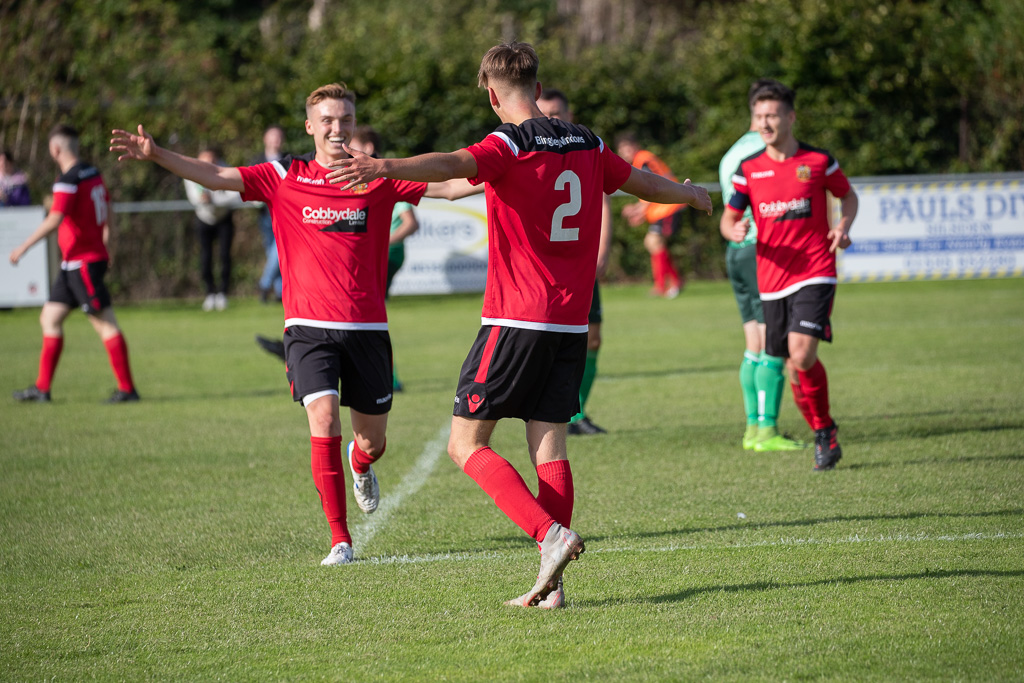