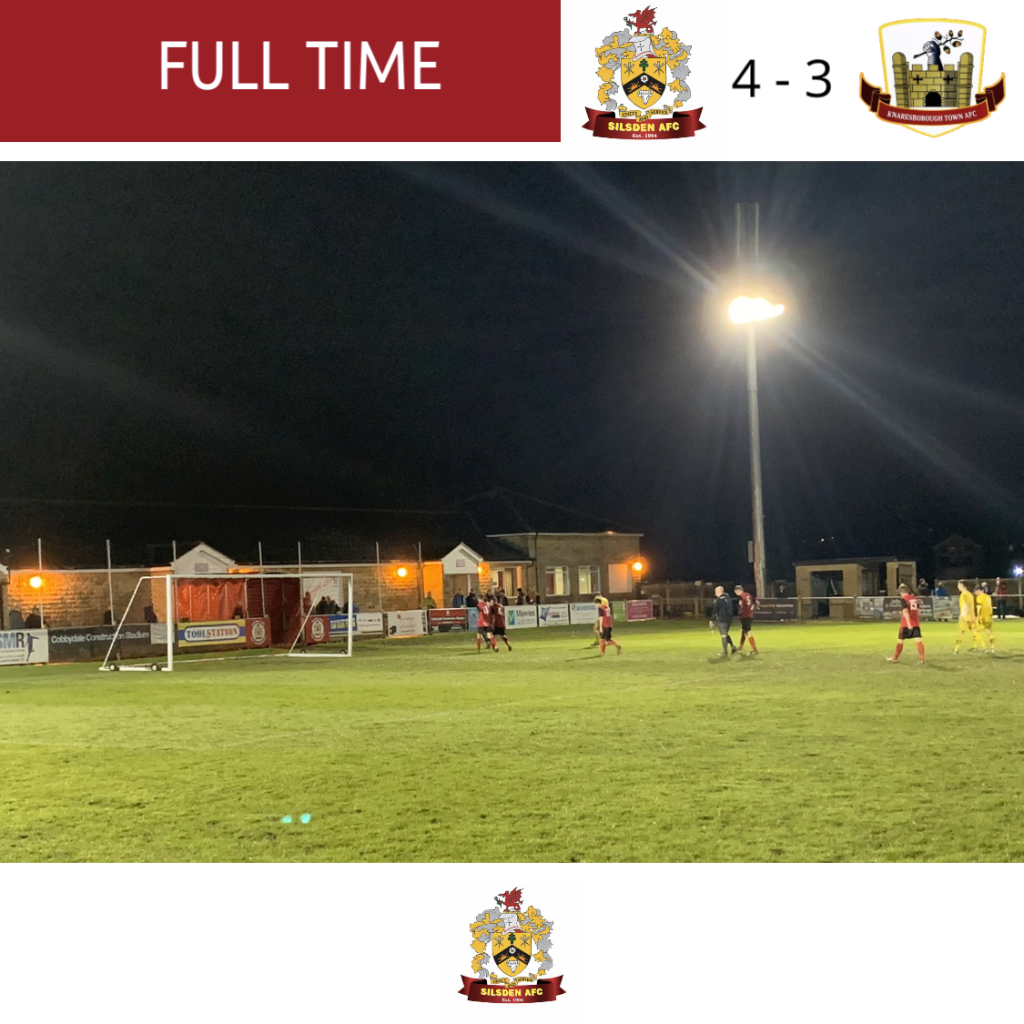 The Cobbydalers entertained Knaresborough Town on Tuesday hoping to bounce back after being knocked out of the FA Vase by Guisborough Town on Saturday. Danny Forrest brought in Dan Illingworth for his first start, surprisingly  playing the defender as a target man. Josh Kaine partnered Sean Airey at the back and Arley Barnes moved to right back.

The pitch, after a day of heavy rain, played well, with both sides looking for quick breaks. Silsden were the first to show, Illingworth having a header cleared and Barnes seeing his cross clear the bar. Khurram Shazad then sent Jake Maltby clear but his shot was blocked. The pace was much quicker than on Saturday. Leon Hurles-Brook cut in from the wing but his shot lacked venom. Chris Wademan then produced the power but his screamer cleared the bar.

After six minutes of pressure Jack Carr fed his skipper but the low shot was comfortably saved by Ben Higginson.  Silsden were keeping possession in midfield but could not penetrate the Town defence, well marshalled by the experienced Dan Thirkell and Greg Anderson.

Brad Walker had two efforts after neat build-up play but the play then became rather frantic, with both defences on top until Kaine conceded a free-kick and a yellow card on twenty minutes. Town’s left-back Phil Milsom broke down the left and a deft back-heel gave Callum Ward a chance. His effort went agonisingly wide.

The opening goal came on twenty-six minutes. Mitchell managed to find some space and curled the ball into the Knaresborough box. Illingworth beat the keeper in the air and HURLES-BROOK blasted it into the net.

Town responded immediately on the restart. A superb through-ball was latched onto by Callum Ward but Higginson made a fine save with his feet. Illingworth headed the resulting corner clear. A minute later Illingworth hit a superb through ball behind a defence, which had pushed up to the half-way line. WADEMAN ran through to slide the ball under the advancing keeper.  Unfortunately, Wademan soon saw yellow for a late tackle!

Maltby then put Khurram Shazad through but his left-footer was blocked. It mattered not a jot. On forty-minutes Shazad slid a corner to Maltby. Drilling the ball into the goal area, AIREY made it three with a tap-in.

The second half saw Knaresborough push forwards but Silsden were dangerous on the break. Shazad hit a through ball to Wademan but his shot was cleared. Jack Carr then cut in from the left but Airey blocked his path with a crunching tackle.

Five minutes into the second half, however, a powerful run by Town’s left-back Phil Milsom saw him reach the byline and cross into the Silsden box. Brad WALKER fired it home. Three minutes later a long ball from the back found Callum WARD in acres of space. He buried the ball into the bottom corner of the net.

The game became frantic with several reckless challenges. Gregg Anderson and Joe Mitchell were cautioned for dangerous tackles before the  players managed to concentrate more on the ball than their opponents. Maltby broke down the right and fed Wademan but his shot was wide. A similar move led to Shazad testing the Town keeper. Parrying the ball, he just managed to gather it as Wademan was about to pull the trigger.

After some cool defending by Kaine, he was injured by Wards dangerous challenge. Then Illingworth was clattered. The game went on with the Silsden man lying in agony. Eventually the whistle went and Illingworth was carried off. Robbie Fox replaced him.

Kaine, who was carrying a knock, was unable to chase down his man. Josh Wick broke down the left and slid the ball into the path of Jack CARR, who hit the equaliser home on seventy-two minutes. 3-3!

Danny Forrest decided to substitute Robbie Fox for Illingworth.  It would turn out to be a master-stroke! Immediately he burst through a defence which was tiring in the heavy conditions. His pace caused problems sending a ball out to Barnes, who shot narrowly wide.

At the other end Knaresborough won a corner. They brought the centre backs up into a crowded penalty area. Kaine headed clear. Wademan and Maltby were replaced by Harry Thompson and Lewis Morgan.

Fox, who was a great outlet for the Cobbydalers, was chasing down every ball, pressurising the visitors’ defence. With five minutes to go, HURLES-BROOK ran forward and, with a great finish from the edge of the area, made it 4-3!. The visitors launched the ball forwards and packed the Silsden area but the Cobbydalers held them at bay until the dying minutes. A free-kick was launched into the Silsden box and eventually into the Silsden net. The assistant’s’ flag was raised for an infringement. Offside! Silsden broke away and Hurles-Brook almost netted a fifth! That would have been tough on the visitors!

On Saturday the Cobbydalers travel to Maltby Main.