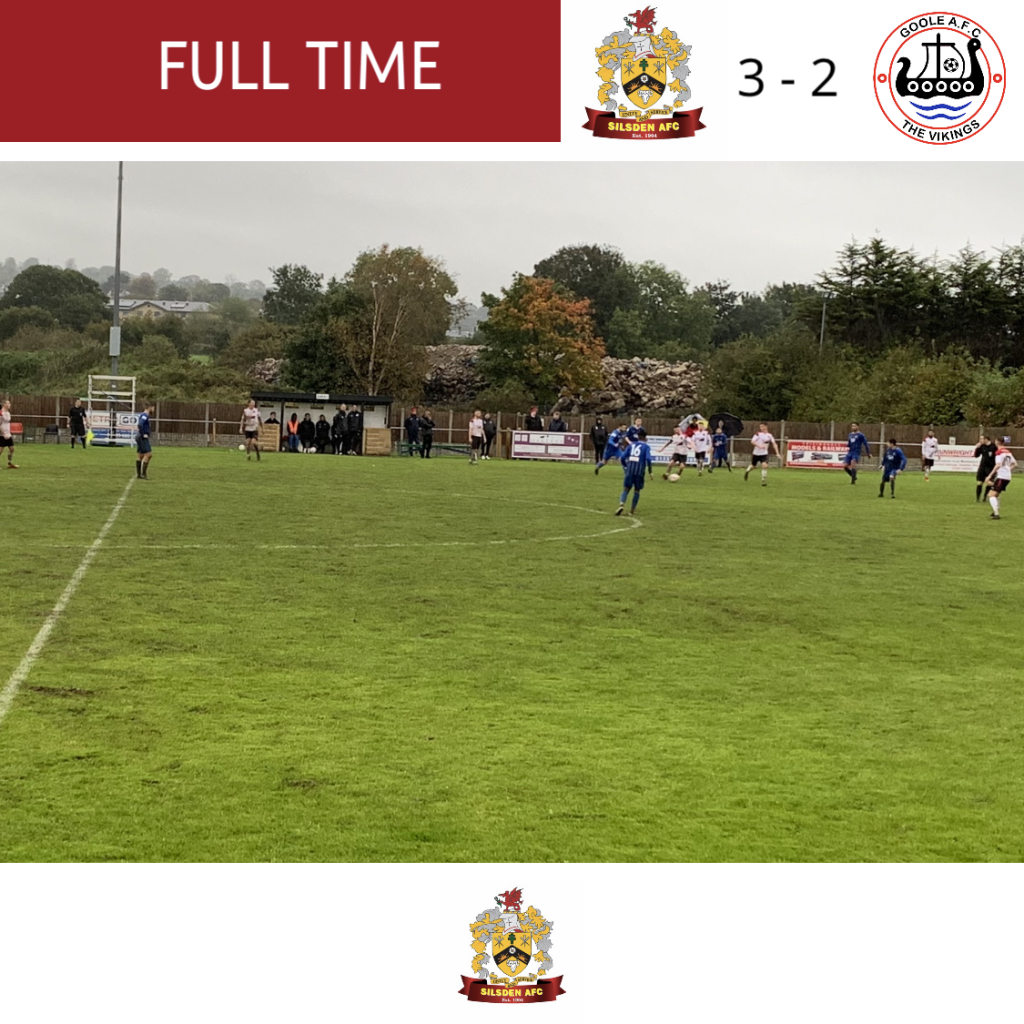 With a growing injury list, Danny Forrest brought new signings into the team. Jake Maltby, who is dual registered with Farsley Celtic, is a young ball-playing midfielder, and full back Harry Parsons, the under 23’s captain. Young Robby Fox stayed up front on the left and Ben Higginson came in for Alfie Darke in goal. Darke’s injury doesn’t look as serious as first thought.

The pitch had been in perfect condition in the morning but persistent heavy rain made the surface tricky at kick-off time.

Joe Mitchell is now back to full fitness and early in the game he released Khurram Shazad up the left. His cross was headed goalwards by Fox but Matt Zaniewski, in the Vikings’ goal, flicked the ball over the bar. The corner was swung in and Myles Foley appeared to be dragged to the floor but no penalty resulted. Four minutes later Joe O’Neill pulled Antony Brown back when clear. Penalty!

The Silsden striker hit his spot-kick over the bar! Brown almost made amends immediately, sweeping up the left. A sweet turn inside the full-back was followed by him cutting outside the keeper. Unfortunately his shot was cleared off the goal line. Goole attacked immediately and then Silsden replied, but on twenty-six minutes with the Cobbydalers stretched, Anees YOUNIS broke through to put the Vikings one up.

Gradually Silsden settled with Maltby anchoring the midfield allowing Mitchell and Arley Barnes the freedom to break forwards to support the attack. Barnes saw a superb cross punched clear by Zaniewski before Higginson denied Josh Schofield at the other end.

Three minutes later the Cobbydalers were level. Pownall hit a long ball up the left to Shazad. Cutting inside the full-back, SHAZAD hit the ball home to level the scores. After a below-par performance last week Shazad was back to his best! Barnes, who was enjoying the freedom he was given, hit a superb ball up to Brown, who turned inside his marker, only see his low shot saved by the Goole keeper.

Young Parsons, who had an excellent game and showed great maturity, was caught out for the only time by Jayden Sandhu. Luckily his cross was cleared for a corner. However Silsden were caught out when the ball was played back to Younis, who curled it in for SANDHU to tap it home at the far post. Goole pressurized the Silsden defence. Higginson denied Reggie Waud with low save to his right and then Sandhu hit the side netting.

Five minutes before the break Shazad latched onto a through ball from Foley. He cut back to set up Barnes whose shot just cleared the bar. Another run of pace and persistence saw him cut in from the by-line before finding Antony BROWN, who fired home the equaliser.

With Maltby spreading the ball left and right, both Barnes and Mitchell were able to support the forwards. Barnes set up Shazad early in the half to send Brown free but the striker delayed his shot and was closed down. A flowing move from right to left and back again emphasised the growing confidence of the Cobbydalers. Goole’s Waud headed over before some composure from Parsons sent Barnes free.

The attack was broken up before Shazad hit a cross field ball which was pulled down by Pownall, who had broken  down the right. His cross was met by Brown but his header was wide. Maltby began to produce some delightful through balls but gradually the pitch became heavier with pockets of standing water in places.

Chris Wademan came on for Brown, who had worked tirelessly chasing down defenders. Wademan’s pace troubled the visitors and eventually his cross was deflected into his own net by the unfortunate DACRE. A superb tackle by Parsons denied Vickings’ substitute Tawheed Ahmed before a penetrative break away between Barnes and Shazad ended with the later seeing a shot saved. Wademan set him up again but his next effort cleared the bar.

In the dying minutes Goole threw defenders forwards for a corner. The in-swinger hit the cross-bar and fell to the feet of Schofield at the far post. The ball bounced off him onto the post and slid agonisingly along the goal line before being cleared by Airey.  Phew!!!! The Cobbydalers held out for the three points.

Forrest was delighted with the performance as much as the result. “The new lads fitted in really well showing composure and maturity. With Mitchell back in the team and Shazad back to his best we looked much more attractive and dangerous.”

Next Saturday The Cobbydalers entertain Guisborough Town in the Buildbase F.A. Vase, second qualifying round. The teams have met once before, in 2009, when Silsden were beaten 5-6. Silsden’s scorers were Longley, Ryan (2), Simpson and Barraclough.