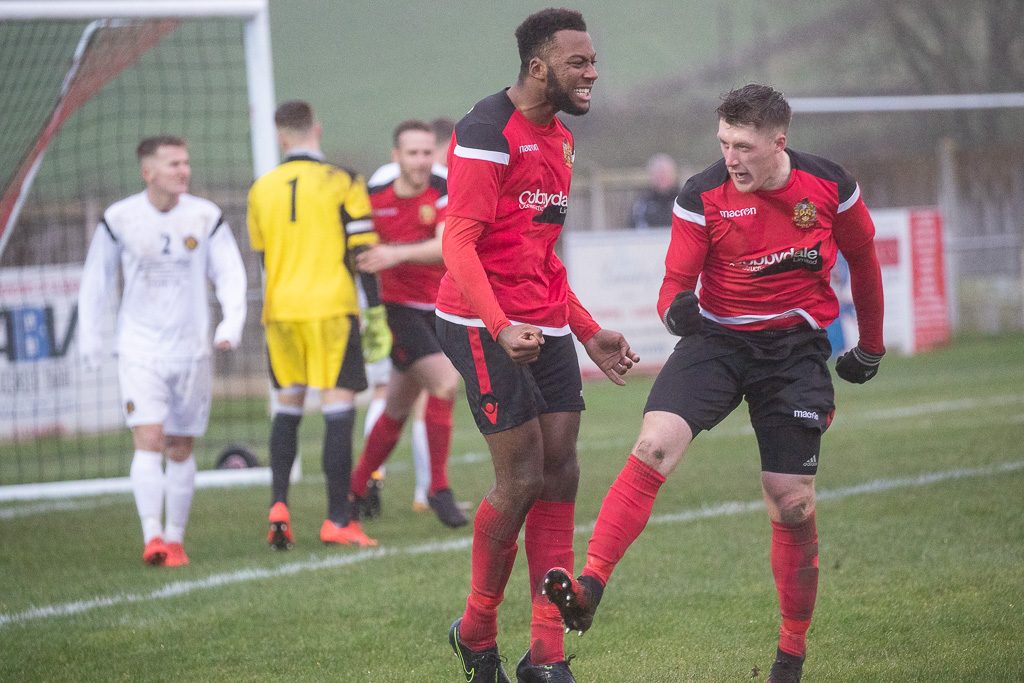 For the third time in a week the Cobbydalers’ home game was played in a gale. Fortunately the home side managed it well despite not scoring with the wind in their “favour”? Indeed their second half performance showed how it was easier to play against the elements.

The wind and rain in the first half saw the home side on the attack from the start with young Connor Thompson breaking down the left and crossing into the Ambers’ box in the third minute. The ball was cleared for a corner which caught on the wind, a fate which saw the end of the next two attacks.

Handsworth’s first sortie forwards almost led to a goal, mainly due to a back pass which Ben Higginson just cleared as Luke Rawson was breaking forwards. Harry Mitchell, the Ambers’ play maker, was driving his team forwards. Marley Grant broke up the left and crossed to Rawson who fired into the side netting.

Lawrence Sorhaindo then set Matthias Britton free down the left but the “lack of a left foot” forced the wide man to cut back and the chance was lost. Thomson then broke down the right. His cross was cleared for a corner. It was headed out to Lawrence Sorhaindo, on the left, but his curling shot lacked enough pace to beat Ben Townsend in the Handsworth goal.

On seventeen minutes Khurram Shazad hit a rising drive which Townsend did well to tip over, before Shazad slid the ball through to Britton, who fired over the bar. Liam Hudson was then off target after more good work from Shazad before Arley Barnes, at full stretch, just failed to reach Sorhaindo’s through ball.

Hudson was slow to react to a break from the Ambers but Kaine came to the rescue on two occasions to snuff out the danger midway through the half. Sorhaindo’s powerful run down the left ended with a superb cross into the Handsworth box but there was no support from his teammates.

With ten minutes of the half left, Silsden pushed harder. Barnes set up Hudson who couldn’t get enough power on his shot. Handsworth were dominating possession with Harry Mitchell in the thick of it but, in the final minutes, Josh Dacre blocked a shot from Shazad. Illingworth headed over and Townsend denied both Barnes and Shazad with fine saves to ensure that his team had kept a clean sheet.

The visitors might have expected to dominate the second half but the Cobbydalers took control with a high back line and some slick passing and possession. Foley went on a run to the by-line in the opening minutes. He crossed to Barnes who shot low. The wind just took it off target but Luke Hudson, on for Britton, just failed to get a touch on it. However, a minute later, Silsden took the lead with SORHAINDO slipping the ball past Townsend after a powerful run.

Handsworth failed to master Silsden’s high defensive line with several balls reaching the Silsden keeper on the wind or going out of play. Sorhaindo had another chance in the visitor’s goal area but his shot was weak before Shazad went close and Joe Mitchell’s effort was well saved. Indeed, Silsden began to create more chances. A powerful fifty-yard run by Shazad was halted on the edge of the Handsworth box before Barnes released Mitchell, whose shot cleared the bar.

At the other end Liam Hudson broke up a dangerous attack whilst Kaine ended a slick move involving five Handsworth players. But it was the Cobbydalers who looked more dangerous. Three minutes after coming on as a substitute, Jake Taylor outpaced the Ambers’ defence only to shot over the bar…like Mitchell’s effort, getting caught on the wind.

Silsden might have rued not netting a second but Anthony Mackie’s free-kick, on the edge of the penalty area sailed over the bar and Higginson made a fine save to deny Harry Mitchell. The Cobbydalers should have made it two when Taylor and Shazad broke clear to the edge of the area. With only the keeper to beat they wasted the golden opportunity.

With ten minutes left Danny Riley came on for Shazad. He epitomised Silsden’s resolve chasing back to his own goal area to deny Handsworth. It was like the “ALAMO”. Illingworth was magnificent in defence, Liam Hudson headed clear, Joe Mitchell blocked a low shot.  TAYLOR was back to deny the visitors another chance before running through the visitor’s defence to seal the victory with a slick shot.

Illingworth blocked one more effort and Ehsan Mohammed shot over in stoppage time. Six points  from two games lifted Silsden up the table but just as important was the fighting spirit shown by the team.

On Saturday Silsden travel to Yorkshire Amateurs before a making a trip to Nostell Miners Welfare: mid-table in League One: on the following Tuesday, in the League cup.