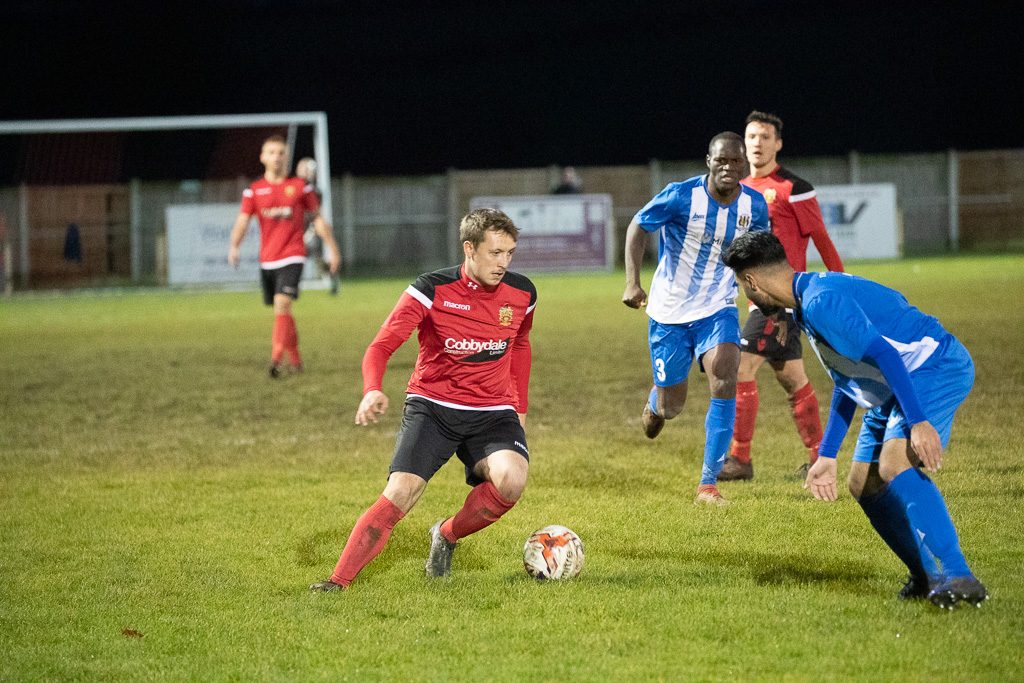 The Cobbydalers travelled to the Southerns  Stadium, on Saturday, for their return fixture against The Ammers, who stood third in the table at the start of play. Silsden had lost the home game to the Ammers in September five-nil. In fact the Ammers away record is the best in the league, winning ten and drawing one of their eleven games. At home their record is won three, drawn four and lost four!

The Ammers were first on the attack putting Silsden under pressure but it was the Cobbydalers who went closest to opening their account. It was a superb counter attack. Left back Connor Thomson  broke up the left and exchanged passes with Lawrence Sorhaindo before the ball was slid to Arley Barnes. Barnes hit an excellent volley but it was just wide of the far post.

The Cobbydalers thought they had taken the lead on ten minutes when Liam Hudson set up Dan Illingworth who headed home. However the whistle went for an infringement. A minute later Sorhaindo headed on to Jake Taylor, who saw his powerful shot well saved by Edward Wilcznski.

The Ammers broke swiftly and Silsden were fortunate that Leon Henry’s header bounced onto the cross bar. Silsden responded with another attack but the Ammers countered immediately, Roy Fogarty’s header clearing the crossbar.

Josh Kaine was then called into the action making a superb block on Aiden Savoury’s thunderbolt. The skipper was injured but recovered quickly to clear Priestley’s dangerous cross, with Savoury poised to open the scoring.

At the other end, Sorhaindo headed Illingworth’s throw-in wide but he was always a threat, just failing to net when Shazad Khurram, after a deceiving dip of the shoulder had caused panic, set him up. With ten minutes of the half left, Thomson won the ball near the Silsden by-line before bursting up the left. He was upended but the fee-kick was cleared.           Both sides had chances in the dying minutes, Higginson saving at Savoury’s feet after a corner had been swung in and then Sorhaindo burst through at the other end before shooting just wide of the far post.

If the first half hadn’t been pulsating enough,  the second started with the home side battering the Silsden goal as if storm “Ciara” had arrived twelve hours early! Kane was booked for a late challenge as the Ammers bombarded the Silsden goal. Illingworth blocked close range efforts from Savoury and Blackie before Higginson, somehow, managed to get a strong hand on Stephen Close range effort. Phew!

Silsden gradually settled, counter attacking down the flank, but the home side were in the ascendancy. Fogarty shot over before Kaine broke up another attack. Silsden withstood the pressure and countered but both Sorhaindo, after a thirty yard break, and Miles Foley saw their efforts comfortably saved and Taylor shot wide after a fine run from Barnes.

The pressure eventually told when a corner was swung in. Dempsey’s scissors kick rattled the bar and FOGGARTY volleyed home from close range. Silsden almost levelled immediately after a swift attack led to a corner. Instead of swinging it into the box, Khurram laid it back to Connor Thompson but the full back’s shot cleared the bar.

Luke Hudson then cleared up after Thomson had been beaten before a curling free-kick from Khurram shaved the outside of the Ammers post. Higginson was then in the action again tipping Fogarty’s shot over the bar and then saving a header from Savoury at the near post.

Chris WADEMAN, who had come on for Taylor, soon latched onto a through ball outpacing two defenders before netting the equaliser seventeen minutes from time. He was mauled to the floor by his team-mates. Silsden still had work to do to deny the home side but Wademan, after winning a corner, almost scored a second after Wilcznski had dropped Illingworth’s header. Unfortunately his effort was cleared off the goal line.

Two more saves by Higginson made sure that the points were shared. It had been a pulsating game and further evidence that the Cobbydalers are gelling together well.

Tuesdays’ game, at home to Nostell Miners Welfare looks in doubt,  leaving the Cobbydalers without a game until Feb 22nd when they entertain AFC Mansfield. This match will be a “Pay-What- You-Want” game, the profits going to charity in honour of the late Tom Marshall.