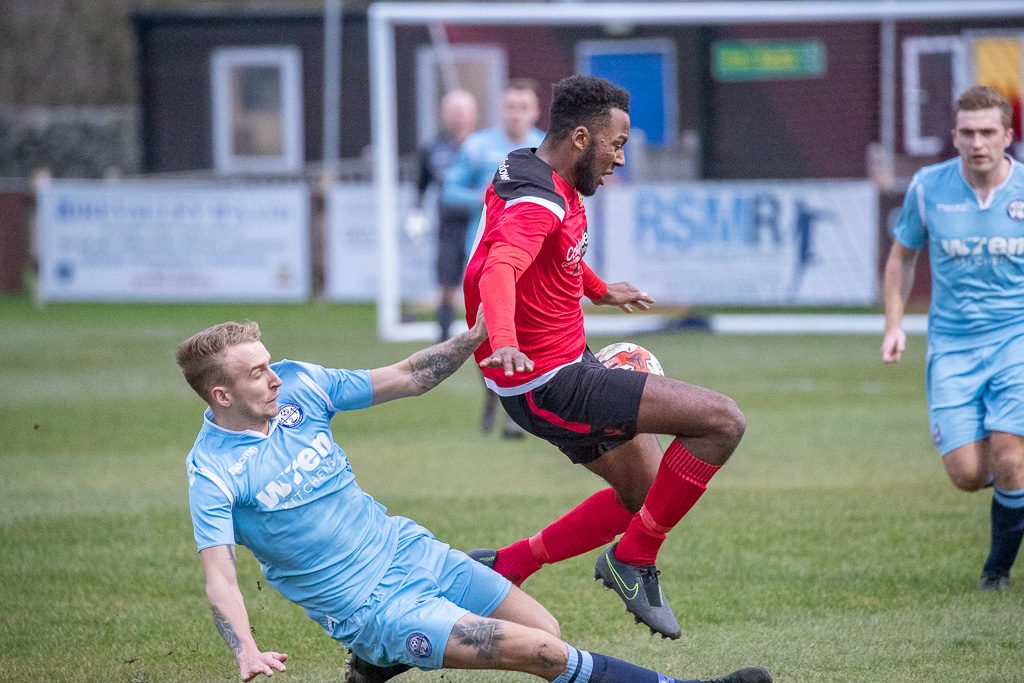 COBBYDALERS UNABLE TO MASTER THE GALE

The Cobbydaler were playing their first home game since November 16th , having had their only home match in that period postponed. With a spirited performance last time out at promotion hopefuls Hemsworth M.W., they were hoping to cheer up the divisions’ largest crowd of the day.

In the last fortnight  manager Forrest had lost right-back  Jay Benn who has been offered an 18 month contract at Halifax AFC (with the Cobbydalers best wishes), Aidan Kirby who has joined Campion, Mark Everingham for a month with hamstring problems and Dan Illingworth, who is hoping to be fit for next Saturday. In the meantime Forrest has signed 20 year old Myles Foley who had had a spell at Ossett United, and Dan Hill, who has returned after trying his luck at Hyde United.

In the reverse fixture in September the Cobbydalers had lost 3-0 and also lost the services of keeper Alfie Darke, who is still receiving treatment.

Silsden, who were playing against a very strong wind in the first half, almost took an early lead. Matthias Britton received the ball from the kick-off and threaded it through to Lawrence Sorhaindo. The striker broke forwards and slid the ball to Britton who was halted on the edge of the Barton penalty area.

The visitors responded immediately with Ellis Barkworth breaking down the right flank and crossing into the Silsden box. Waide Fairhurst rose above the defence to head powerfully but Ben Higginson, in the Silsden goal, denied him with a superb save. Some neat two-touch football saw the Cobbydalers advance forwards but the ball was cleared up the field. Hinchliffe broke down the left and crossed into the box. Jack RICHARDSON head home the opener on nine minutes.

Silsden were then fortunate not to concede a second when an in-swinging corner bounced on the Silsden crossbar. The Barton skipper was then injured and had to be substituted before Ben Hinchcliffe blasted over from eight yards out.

Silsden broke  clear with Sorhaindo getting to the edge of the Barton box on the right. Keeper Sam Riches advanced but Sorhaindo slid the ball across to the unmarked Britton. The winger had time to kill the ball and slip it into the net. Unfortunately his shot cleared the crossbar of the unguarded goal!

As the wind increased, the pattern of play became fragmented.  Liam Hudson tried to set up one attack before Sorhaindo sent Khurram Shazad through, but he had strayed a tad offside. Khurram then sent Sorhaindo through but Riches was swiftly off his line to block the striker’s effort.

In the dying minutes of the first half, Danny North fired over the Silsden bar having been set up by Barkworth. It had been a golden opportunity to take a two goal lead which would have made it hard for the Cobbydalers to come back.       However the visitors did make it two, two minutes before the break. Left back Neil BURDETT broke down the left and squeezed past Kaine on the goal line before driving home from a narrow angle. Sorhaindo did his best to pull a goal back before the break but was denied by Matty Plummer.

The second-half! The wind strengthened, the rain came down horizontally, control was difficult  for the attackers who overhit too many passes or gave defenders too much time to get behind the ball.  Joe Mitchell worked tirelessly in midfield but the forwards couldn’t master the conditions. Chris Wademan came on for the ineffective Shazzad, neither player being able to match their best, and McKiernon replaced Jake Taylor.

Mitchell set up Sorhaindo whose effort was blocked by the keeper before Barton broke forward.  Chris Salt drove the ball forwards. No Silsden player spotted the danger and substitute Danny NORTH slid in a third on sixty –two minutes.

Mitchell and Barnes worked hard to set up attacks, but only Sorhaindo offered any kind of threat, the keeper denying him on two occasions. Josh Brown went close in the dying minutes and Riches tipped a Sorhaindo header over the bar.

Forrest was disappointed with the result but also with the lack of intensity of some of his players. Barton managed the dreadful conditions much better than the Cobbydalers!