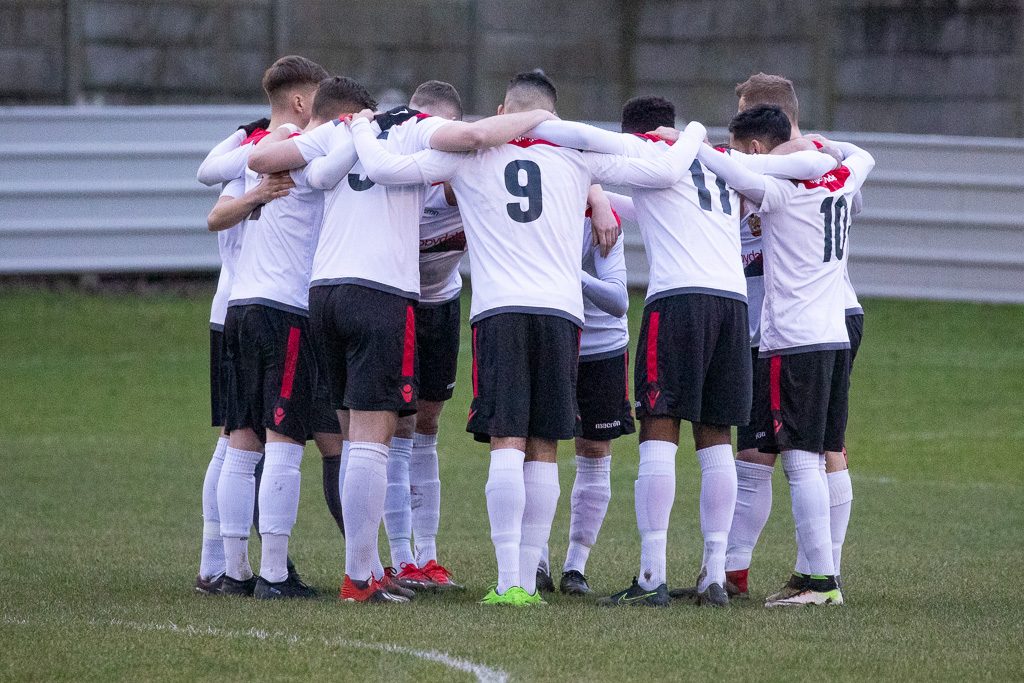 COBBYDALERS GIVE SECOND-PLACED HEMSWORTH A SCARE

The Cobbydalers travelled to second-placed Hemsworth Miners Welfare on Saturday hoping to end the decade on a high. As it turns out they took the promotion hopefuls to the wire in a compelling game which swung one way and then the other.

Danny Forrest was forced to make two changes with Dan Illingworth and Liam Hudson unavailable. Luckily Mark Everingham had recovered from injury and the experienced Craig Bentham returned to the starting line up.

Roared on by a raucous, partisan crowd The Miners were swiftly on the offensive, Josh Brown having to concede a corner in the second minute.  Brown headed clear before Arley Barnes broke up another attack. Silsden were pushed back with an onslaught of high balls. Mark Everingham conceded another corner. The ball was swung in, centre-back Harry VIGGARS headed onto the post before blasting home the rebound from close range.

Silsden responded with a break down the left where Lawrence Sorhaindo cut in before moving the ball to the right where Jake Taylor’s cross was headed clear. Hemsworth counter-attacked at pace but Silsden keeper Ben Higginson dived at the feet of Luke Hogg to deny the Miners a second. Declan Parker picked up the clearance and got the better of Barnes before shooting over. It was probably the only time the skipper was beaten in the whole game!

Silsden, who had survived the first onslaught, began to take the game to their opponents. Khurram Shazad managed to get down the right before pulling the ball back to edge of the area, to Craig Bentham who shot narrowly wide. This was followed up by some slick passing down the left which ended with Miners’ keeper Jordan Greaves saving from Sorhaindo.

The Miners continued with incisive balls hoping for some knock-ons but the Silsden defence held firm with Brown dominating in the air and Barnes clearing up any loose balls. The Cobbydalers began to open up the home defence with some slick pass-and-move football. Jay Benn cut in from the right to set up Khurram who saw his effort go narrowly wide of the far post. Bentham then released Matthias Britton who was fouled by Viggars. The free kick was saved before Viggars brought down Taylor whose free-kick was comfortably saved. Another cynical foul on Britton broke up another attack but the centre-back somehow avoided a yellow card!

Hemsworth counter-attacked but Everingham blocked Hoggs’ effort at the expense of a corner before the Cobbydalers broke forwards, Bentham twice shooting wide. Sorhaindo then brought a superb save from Greaves before a foul by Bentham led to the first booking and a free-kick, Barnes headed clear but Owen Wildblood and Ryan Carrol combined to create a chance.

With five minutes left of the half, the Cobbydalers played the ball across the back in a series of fifteen passes before they broke swiftly. Britton sent Shazad free but his shot was cleared. Joe Mitchell, who had been immense in midfield, then held up Ripley, and Benn made two telling tackles. Superb interplay between Mitchell and Britton freed Sorhaindo, who was on the penalty spot. The striker hit the ball cleanly but Greaves made a point-blank save, at the expense of a corner. The ball was swung in and BROWN headed in the equaliser, on the stroke of half-time, to the dismay of the home fans.

Silsden broke forwards from the restart but Britton was dispossessed and Hemsworth broke down the right. The ball was crossed from the by-line but Higginson saved Ripley’s header. The game was nip and tuck with Silsden matching the efforts of the home side. Jones wasted a chance after a good delivery from Carroll before Everingham went close after a slick move down Silsden’s left.

Following another break down the left, Shazad brought a superb save from Greaves at the expense of a corner. BROWN rose above everyone else to head the Cobbydalers into the lead. (Khurram was then knocked out by a point blank clearance and replaced by Chris Wademan).

Unfortunately, three minutes after Brown’s goal, the centre-back was dispossessed trying to shield the ball out conceding a corner. The ball was swung in and VIGGARS headed the equaliser. The initiative swung in Hemsworth favour but Tiana wasted a glorious chance. The Miners pressed but Mitchell broke up the attack before launching the next Silsden attack. Back came the Miners, Higginson making two telling saves to keep Silsden in the game.  But the third goal finally came for the home side. Ryan CARROLL managed to get the better of a tussle with the exhausted Mitchell, fifteen minutes from time to make it three.

Hemsworth kept up the pressure. Higginson made a fine save to deny Luke Hogg and Barnes and Brown broke up another attack. Everingham headed clear as Silsden broke down the right through Mitchell who crossed to Taylor. His shot was volleyed wide. The final whistle went!

It had been a superb game, flowing from one end to the other. There was some thrilling football from both sides. Silsden demonstrated that the gap between the top and mid table is not vast with probably their best performance of the season.

Next Saturday the Cobbydalers are without a game! with three the following week!