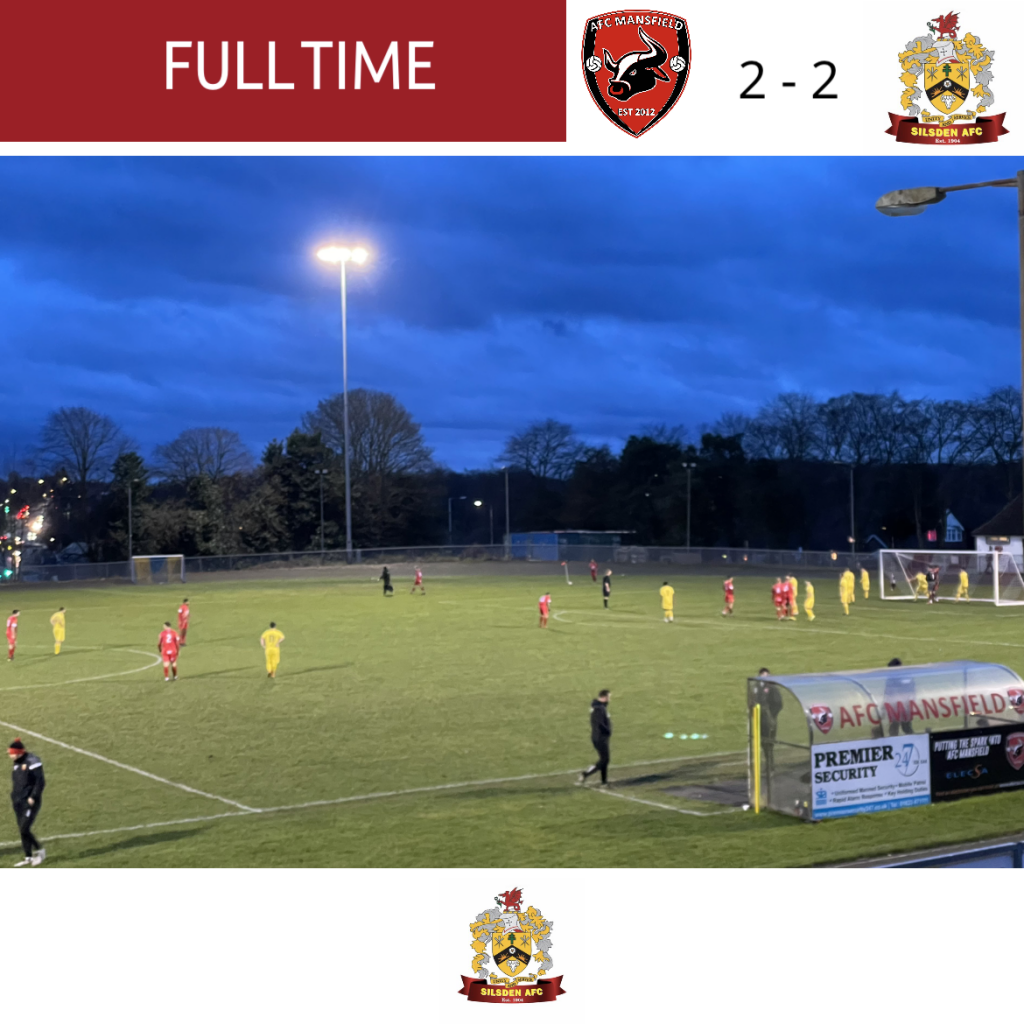 HUDSON AT THE DOUBLE

Danny Forrest made two changes to the starting line up, Shaun Airey replacing Josh Kaine who was unavailable and Craig Billington replacing Mark Simpson who dropped to the bench.

AFC Mansfield boss Matt Chatfield made a few changes after the Bulls recent defeat to Hemsworth MWFC. The Bulls top scorer Ross Duggan lead the line once again, already with an impressive 16 goals in all competitions.

The opening minutes of the game belonged to the Bulls who dominated in the early minutes, the first chance of the game feel too Duggan but thanks to great defending by Airey and Barnes the chance ultimately came to nothing.

In the 9th minute AFC Mansfield opened the scoring, skipper Josh Wilde with a great strike from a tight angle leaving Kyle Welsh with little chance in the goal.

Silsden responded emphatically just a minute later, after a corner broke in the box for Liam Hudson the Sils man smashed the ball passed Warhust to bring the game level.

The Sils kept pushing for the lead, Craig Billington striking just over the bar. AFC Mansfield were quick to attack and in the 15th minute the Bulls lead once again. Ross Duggan with a low finish into the bottom corner.

Both teams continued to exchange attacks, but there would be no further goals in the first half.

Just before the break Forrest was forced into a change as Illingworth was unable to continue with Foley coming on to replace him.

Into the second half and Silsden started brightly with Hudson testing the keeper once again. Moments later Harry Parsons produced a great run down the left before cutting in, his shot was just about crowded out by the Bulls back line.

Mansfield threatened once again as they attacked down the wing, the ball in somehow evaded everyone in the middle and Silsden were able to clear the danger.

Carlton Pownall proved a constant menace down the right side, a strong, mazy run winning the Sils a corner. From the resulting corner Billington and Simpson both had attemps blocked in a goal mouth scramble.

Simpson continued to threaten Warhurst’s goal, in the 63rd minute the keeper did well to save a low strike from the Sils substitute but could only parry into the path of Hudson who once again brought the Sils level.

Danny Forrest’s men continued to push forward with Billington and Simpson causing lots of problems for the hosts defence, Simpson broke and looked to be going through on goal before being clipped by the Bulls defender. The referee produced the first yellow card of the game.

AFC Mansfield came forward again but Duggan could only shoot over from a tight angle.

Craig Billington and Ross Killock were both booked after a clash in the box whilst the Sils defended a corner.

Silsden kept pushing for the winner, Billington seeing a shot saved from a tight angle before Mitchell almost dispossessed the keeper after a poor back pass.

In the 80th minute Simpson did well to beat his man in the box and deliver towards the near post, Billington challenged with the keeper and defender but somehow the ball stayed out.

Harry Thompson picked up another booking as he stopped a Bulls counter attack as the hosts threated Welsh’s goal.

Pownall with another driving run down the right this time his deep delivery to the back post just proved too strong for the on rushing Billington.

A great point on the road for the Sils against a strong AFC Mansfield team, lots of positives to take forward into the upcoming games. Silsden are back at the Cobbydale Construction Stadium next Saturday as we welcome Grimsby Borough.