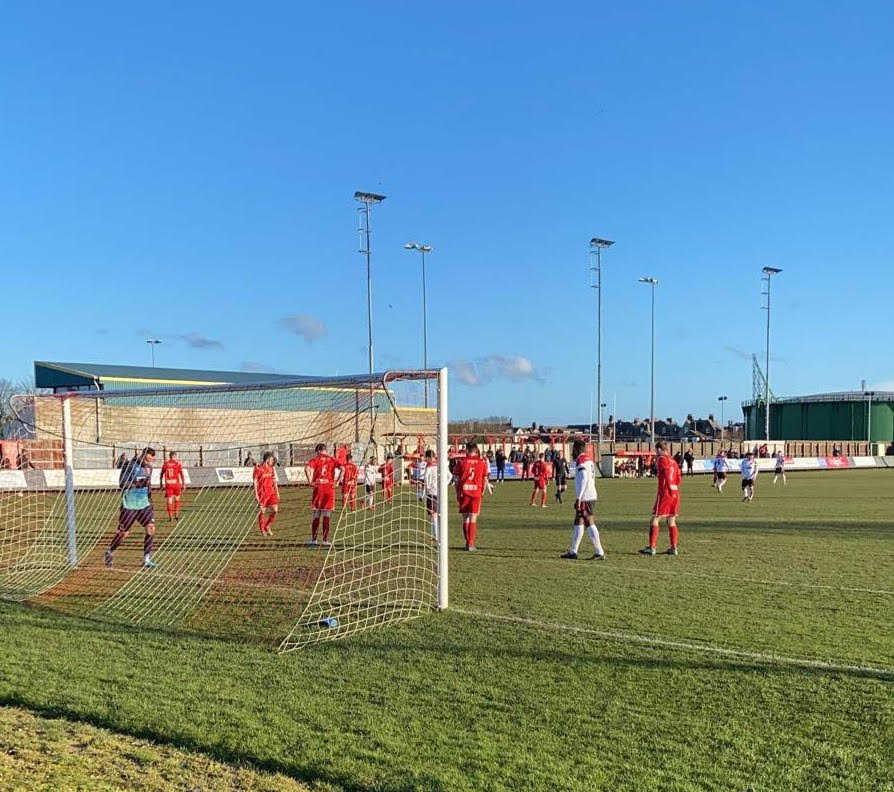 Following Wednesday’s victory at League leaders Staveley, the Cobbydalers travelled to fourth placed Bridlington. This was one of only three games in the NECFL Premier Division due to the weather. The pitch was fine and many of the Cobbydalers fans had travelled to the Costa del Yorkshire for the game.

The Seasiders played with a strong wind behind them in the first half but whether this was an advantage or not was questionable as several through balls and goal efforts caught on the wind.

Silsden were the first to create an opportunity, Myles Foley driving the ball up the right where Jake Taylor headed for goal but his shot was just off target. James Hitchcock, the Seasiders keeper, denied Taylor another chance, running out of his area to clear a through ball.

Eventually Bridlington settled, Tom Waudby having one effort blocked by Josh Kaine for a corner before heading over a cross from the left. Brid continued to push forwards and it was Kaine twice more who blocked low shots.

The best chance came on seventeen minutes when Billy Logan headed goalwards but only into the safe hands of Ben Higginson. Silsden were struggling to get anywhere near the slick interplay seen at Staveley and, had Lewis Dennison got any contact on a superb cross from Lewis Taylor, they would have opened their account midway through the half.

Minutes later Myles Foley blocked a shot from Tom Waudby. Silsden did create a half chance, Kaine driving the ball through the home defence for Sorhaindo to run onto. Once again Hitchcock won the chase to launch the ball up the field where Joe Mitchell broke up an attack down the right.

Finally, ten minutes before the break, Khurram Shazad found enough space to slip the ball through into the penalty area where Sorhaindo was tripped by the Brid keeper. TAYLOR took the spot kick which hit the back of the net despite Hitchcock getting a hand on it.

If the Cobbydalers as a unit were struggling to create many openings the skipper was superb. In a five minute spell Kaine twice blocked shots from Billy Logan at the expense of two corners and one effort from McFadyen. Waudby broke through from a throw in on the right before the skipper intervened again!

The resulting corner was swung over but Illingworth headed clear. A superb through ball put McFadyen clear but he shot wide. The half time whistle went with the Cobbydalers a goal up! The home side had been very profligate, to say the least.

The wind eased slightly in the second half and Silsden hoped to be able to gain more control but the game was quite scrappy. Barnes blocked a shot from Logan before Sorhaindo was fouled at the other end. The free-kick was wasted. Illingworth was on hand to deny the home-side a deserved equaliser before Sorhaindo, easily the Cobbydalers best outlet, was halted in the act of shooting. Mitchell’s low shot was saved and Foley’s shot, from the edge of the penalty area was just wide.

Finally the equaliser came. Again it seemed the slightest of touches which brought the whistle but the home support saw the spot kick as justified. McFADYEN levelled the scores.

With the efforts against the league leaders on Wednesday, a long journey home and a late night, followed by a similar journey on the Saturday morning, fatigue crept in on the Cobbydalers. Mitchell blocked a shot from McFadyen and Foley was fortunate in slicing another shot wide. Chris Jenkinson even tried an overhead kick which cleared the bar.

Thankfully SORHAINDO still had the energy to latch onto a long ball to burst past Benn Lewis to strike home off the inside of the far post. With five minutes to go Illingworth conceded a free kick on the edge of the box. WAUDBY hit a screamer into the top corner.

A draw looked on the cards but with the last kick of the game Sorhaindo hit a looping volley over the Brid keeper………………..it hit the crossbar!

The Cobbydalers’ fans had enjoyed their day out at the seaside, many of whom had stayed on overnight, maybe to have a dip in the sea on Sunday morning!

Next Saturday the Cobbydalers entertain Goole FC before travelling to Handsworth on Tuesday 10th March.