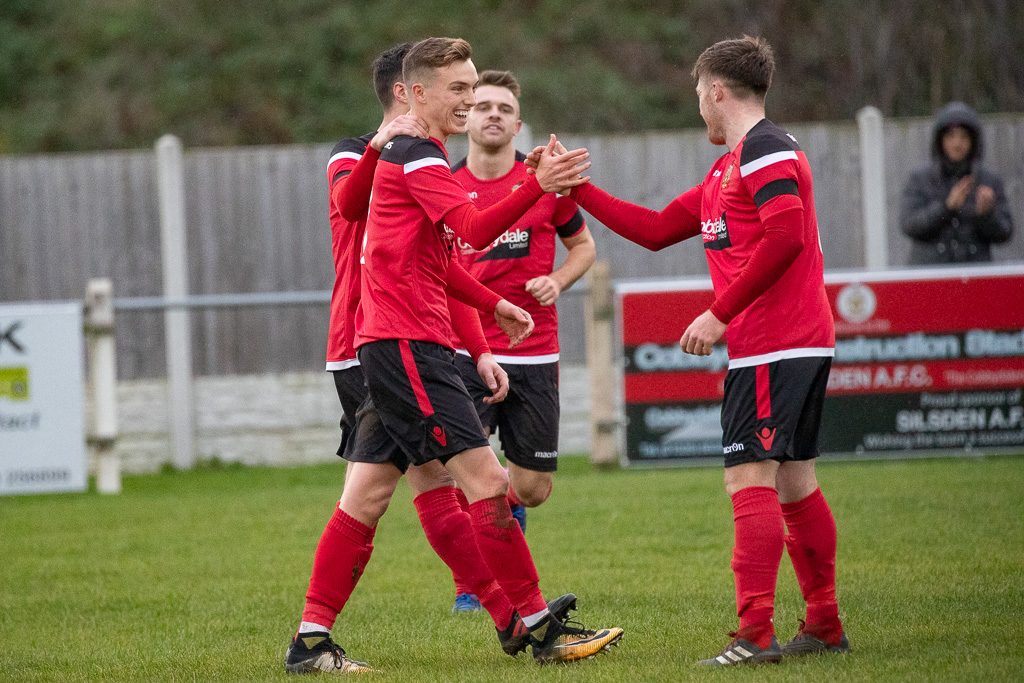 Silsden started the game on the front foot with slick possession football which left their visitors chasing shadows in the early stages, and as early as the 3rd minute caused Albion problems down the right, Khurum Shazad beating his man to get to the bye-line before pulling the ball back but top scorer Aidan Kirby’s shot was blocked by Albion’s skipper Matthew Nebard and the subsequent follow-up was cleared to avert the danger.

Despite the locals bright start Albion showed their quality with a fine ball from Chigumira out to the right hand side for Lyn to put a dangerous cross deep into the Silsden box which Kane did well to clear. Then in the 8th minute Albion played a quick throw in on their right into Javan Benjamin, whose angled shot was brilliantly parried away by Silsden custodian Ben Higginson and the rebound going to the Albion player whose follow-up shot was cleared off the line superbly by the covering Josh Brown, who slid across to clear a certain goal.

Following this though, Silsden dominated possession and in the 17th minute had a good chance when a high ball into the box was headed down by Kirby to Shazad, who pulled the ball back unselfishly, but the resulting shot from Kirby was again blocked to frustrate the Silsden marksman.

The locals were rewarded though in the 22nd minute, when Mark Everingham brilliantly collected a ball cutting in from the left in midfield and fed an incisive pass out right to Jake Taylor-Mountfield who exchanged passes with Shazad before cutting inside in the Albion box onto his left foot and curling a superb left foot shot beyond Smith into the far top corner to deservedly open the scoring for Silsden.

In the 28th minute after good interplay down the left hand side, the ball was played into Kirby, who slid the ball in between the two Albion centre back for Shazad’s

intelligent run, but the through ball was smothered by the on-rushing Smith in the Albion goal.

Silsden had a further opportunity after 35 minutes, when a ball won in midfield was played through to Laurence Sorhaindo who ran onto in into the box, but pulled his shot agonisingly wide of the far post.

Silsden continued to dominate and create chances and in the 39th minute after some good play down the left side, Everingham raced clear and fired a dangerous low ball across, but ‘keeper Smith responded well at his near post parrying away, albeit into a dangerous area but there was no Silsden player on hand to capitalise.

Minutes later in a rare Albion break down the right, Simmi OyeBanji fired his angled shot wide of the far post.

Albion started the second half brightly, playing some neat and tidy football and enjoying much more possession in an attempt to get back into the game. But it was Silsden who threatened to increase their lead when a good ball played out to the right found Taylor-Mountfield whose angled shot was cleanly handled by Smith in the Albion goal.

Although Albion enjoyed the lion’s share of possession they failed to create anything meaningful in the final third until the 54th minute when Lyn played a dangerous ball left footed into the Silsden box from the left, but the ball drifted wide. Then minutes later Everingham’s interplay with Shazad on Silsden’s left led to him cutting in and curling his shot low and beyond the far post as Silsden started to regain control again.

Around the hour mark Silsden started to go through the gears and create openings at will, the best of which was down the right with Taylor-Mountfield forcing another fine save from Smith diving low to his right to parry away as Silsden threatened to increase their lead.

In the 67th minute Silsden were awarded a free kick on the right for a foul on Taylor-Mountfield which Shazad took, playing a superb ball deep into the Albion box for Brown, but he failed to get enough contact onto his diving header to spurn the opportunity with the goal at his mercy.

Kirby was foiled by a superb last ditch tackle by Nebard following a great through ball from the tireless Barnes. And then Taylor-Mountfield had a shot saved by Smith and his follow-up fell invitingly to Kirby with the goal gaping, but he blasted his shot over when he should have scored.

Albion were then reduced to 10 men when left back McGahan, who had already had a yellow card was dismissed following a disputed decision.

Manager Danny Forrest threw on a couple of substitutions late on the try to secure all 3 points with fresh legs up front, but Albion still had a threat and following a free kick in the 80th minute the ball broke to centre back Pashley who smashed his shot at goal but Higginson did well to parry the ball away and Silsden’s defence cleared the danger.

Minutes later after good interplay down Silsden’s left between Everingham and substitute Matthias Britton, the ball was played to Wademan who jinked inside but screwed his shot wide. Then Brown’s towering header from Mitchell’s corner kick looped over the bar as the Cobbydalers threatened again.

However in the last minute of the 90 Albion were harshly awarded a free kick on the left hand corner of the Silsden box for a foul against Brown that was a perfectly good tackle. Substitute Jordan Chippendale struck his free kick low, which took a wicked deflection off the defensive wall up and beyond the helpless Higginson to level the scores against the run of play.

As Silsden pressed to get their noses back in front in added time things could have been even worse for the locals, as Wademan was dispossessed in his own half the ball was fed through to Albion’s Luke Aldrich, but his shot was fired straight at Higginson who handled competently.

Silsden battled to the end though and it was Albion who were hanging on with some desperate challenges late on, but they managed to see the game out for a share the spoils for the second successive week.