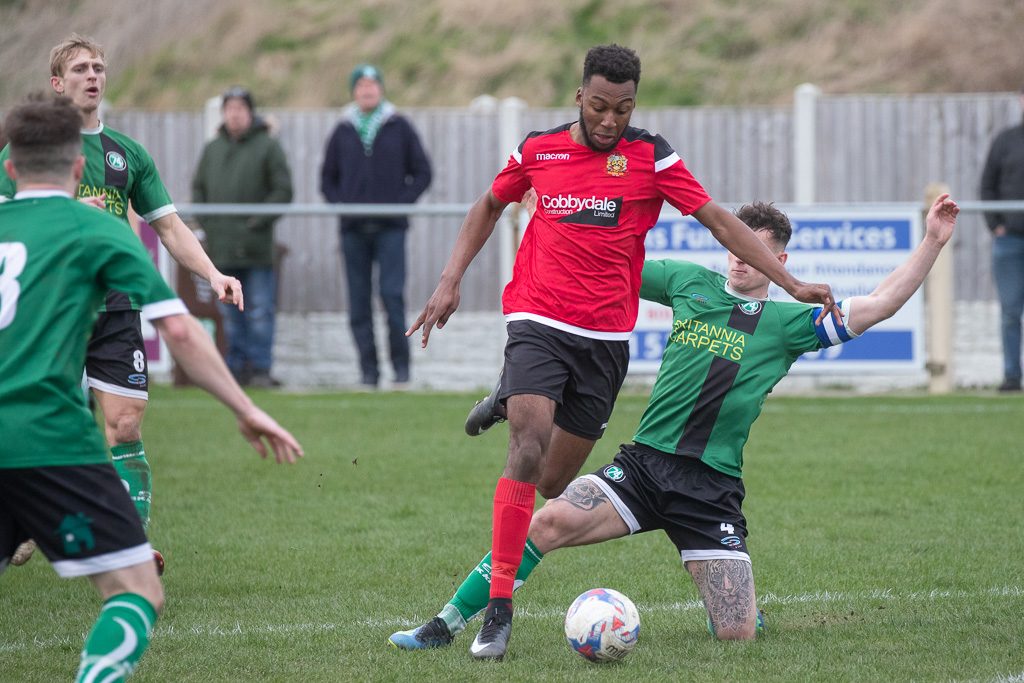 The Cobbydalers made the short journey to Knaresborough on Tuesday to take on Town who had one point more than the Silsden outfit at the start of play. Danny Forrest brought in Josh Brown to strengthen the back alongside Josh Kaine and Dan Illingworth, allowing full backs Jay Benn and Mark Everingham more freedom to attack down the flanks. Arley Barnes and Aidan Kirby were back in the starting line-up.

Silsden were quickly out of the blocks and didn’t take long to score the opener. Everingham slid the ball to Marko BASIC who played a one-two with Lawrence Sorhaindo, including a clever back-heel, striking the ball home under Town’s keeper Sammy Lee, the former Silsden guardian. Minutes later Kirby broke up the left, cut back and hit a low shot from the edge of the penalty area. Lee saved.

Town responded, Jack Carr seeing his drive cleared by Brown but only to Dan Thickell, who volleyed wide. Sorhaindo went close with a header before Liam Hudson managed to break up a Borough attack, after Brown had been beaten on the left.

The game was frantic at times but the Cobbydalers defence was standing firm. Sorhaindo continued to be a good outlet, although the home side were a threat down the flanks.  It was a run down the right by Jack Powis that set up Andy COOPER for the equaliser on 28 minutes. The goal gave the home side the belief and only Illingworth’s intervention prevented them netting another goal.

As it was, Silsden’s next attack saw them retake the lead. A long ball down from Barnes found Kirby. Seeing Sorhaindo on the move, Kirby slipped the ball forwards. SORHAINDO cut in, drew the keeper before curling a peach of a shot into the top corner.

Two sound tackles by Everingham kept Silsden in charge and a sweet interchange between Kirby and Sorhaindo almost led to a third. Minutes later, Lee came off  his line to Barnes’s cross. He missed the ball but upended Kirby who was about to pull the trigger. Penalty! KIRBY made it 3-1 on 37 minutes.

Brown was booked for a high tackle at the other end but the free-kick was cleared. Andy Cooper was looking a threat but Silsden held out until the interval.

Immediately on the restart Cooper broke down the left to cross in a ball to Brad Walker. His superb volley just cleared the Silsden crossbar. Walker then cut in from the left before Illingworth cleared. The wide man hit a dipping volley which beat Silsden keeper Ben Higginson, only to hit the crossbar.

Ten minutes into the half a dangerous lunge by Hudson led to a red card leaving Silsden down to ten. Immediately Town had a great chance to pull one back but Harrop’s header went straight into the arms of Higginson. The ball was thrown to Jay Benn who burst down the wing. He fed Kirby who slid the ball to Sorhaindo on the edge of the Town penalty area.  A dip of the shoulder and the ball shuffled from right foot to left ending with SORHAINDO’s cool finish, putting the Cobbydalers 4-1 up.

Two minutes later Borough pulled a goal back, COOPER netting his second having cut in from the right.

There was still plenty of time for Borough to use the advantage against the ten men but Silsden were resilient. Craig Bentham replaced Jay Ben who had been injured by Jack Carr’s wild challenge, for which a yellow card seemed lenient. Sorhaindo almost completed his hat-trick before he was substituted. Even Everingham went close in the final ten minutes as the Cobbydalers netted three valuable points.

Sorhaindo won the plaudits but the creativity of Basic was crucial in the game and the selfless running of Kirby, together with a stronger defence.

The points were the main thing but the performance should have given the Reds more self-belief for the forthcoming fixtures. Bridlington Town visit the Cobbydale Construction Stadium on Saturday.