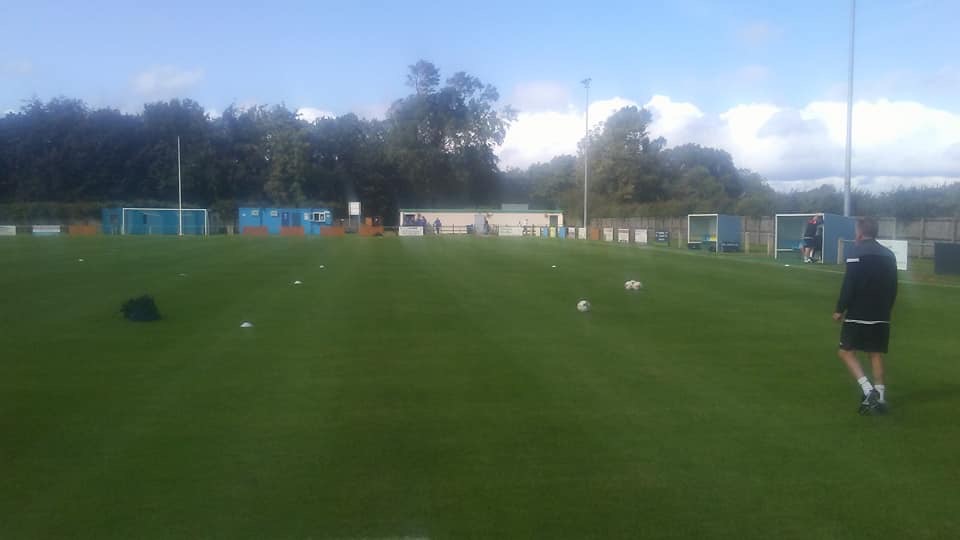 The Cobbydalers travelled to Durham to face Ebac Northern League Division One side Newton Aycliffe on Saturday for the first Qualifying Round of this seasons FA Vase. The Silsden outfit had their best ever run  in the Vase last season, when they reached the third round proper, when they were beaten by semi-finalists Northwich Victoria.

Aycliffe stood 9th and Silsden 10th in their respective leagues, although the home side had progressed to the next stage of the FA Cup, whilst the Cobbydalers had lost in a tense replay against Northwich Vics. Skipper Josh Kaine, who was injured, was replaced by Liam Hudson whilst Khurram Shazad returned to the starting line-up.

It was a glorious afternoon at The Beaumont Landscapes Stadium. The Durham outfit tested the Silsden defence in the opening minutes but it was the Cobbydalers who created the first chance. Dan Illingworth slid the ball to Arley Barnes who released Mark Everingham on the right. The full-back broke up the wing and set up Aidan Kirby whose effort was just wide of the far post.

Josh Brown broke up Aycliffe’s next attack before Dean Thexton fired over the Silsden bar. A long throw-in caught Silsden’s defence off-guard but Nick Green volleyed over from an acute angle. Shaun Ryder was denied by Illingworth before Laurence Sorhaindo cut in from the left. Unfortunately his powerful shot was into the midriff of Aycliffe keeper Adam Pickford.

Another Silsden attack was thwarted. Johnson Ballam was finding lots of space on the Aycliffe right and it was his cross which was eventually diverted into the Silsden net off a Silsden defender. Silsden responded with a break from Everingham who fired over, before Silsden Keeper Alfie Darke made a superb save from Richardson’s header.

Shazad hit a free kick over the bar at the other end before Ballam cut through a sloppy defence. McNamara’s dive in the box may have won an Oscar but it didn’t fool the referee! Hudson then denied Ryder at the expense of a corner, which was cleared.

Midfield dynamo Joe Mitchell, who had broken up play several times in the first half, went close with a powerful shot before Shazad slid the ball to Kirby, who delayed his effort which was eventually charged down.

Silsden were only a goal down at the break thanks to some solid defending. The front men hadn’t functioned as well as they might have, against a resolute defence, but the Cobbydalers were still in the game.

Two minutes into the second half that changed. Illingworth and Barnes, who had been exchanging passes, were closed down and the ball ran to Josh Brown. Brown missed the ball and THEXTON ran in to score a simple goal.

The Cobbydalers began to play some neat football without looking dangerous, and they started to push Aycliffe back with Sorhaindo and Shazad creating more chances. The home side were a threat on the break but Silsden were able to resist. Sorhaindo tested the keeper before Shazad headed Barnes’ cross over the bar.   Barnes then shot wide. Eventually the pressure told. Sorhaindo put SHAZAD through to net after the keeper had parried his first effort.

Illingworth and Brown kept it tight at the back as Silsden began to apply some pressure. Sorhaindo shot over before his run up the wing five minutes later led to a chance for Mitchell, whose shot was saved for a corner. Illingworth headed wide.

Silsden continued to pass in neat triangles without creating chances. Sorhaindo went close before Matthew Lowrie was dismissed for a reckless challenge. The game went into stoppage time Barnes shot over before Silsden “equalised”. The assistant’s flag went up! Offside!  The keeper was on the goal line…but so was an Aycliffe defender. Maybe the assistant was unsighted. Silsden protested but there was no V.A.R.!

On a better day the Cobbydalers might have won. They have played better this season. Hopefully they can bounce back on Saturday when they face Garforth Town, before travelling to Barton-on-Humber on Tuesday 10th Sept.